Hydroxychloroquine has been promoted by President Trump and Fox News as a therapy for COVID-19. Dr. Anthony Fauci, the government’s leading infectious disease expert, and a prominent member of the coronavirus task force, has been more measured in his response, contradicting the President, and calling for more evidence before endorsing the drug.

COVID-19 is a respiratory illness that can trigger a dangerously overactive immune response that leads to the build up of fluid in the lungs, and respiratory distress.

The hope is that hydroxychloroquine can reduce that immune response. It’s an anti-malaria drug also used for rheumatoid arthritis and lupus, which are auto-immune diseases.

In viral reproduction, the virus attaches to host receptor and is taken up in a cell inside a specific compartment. But, in order to replicate, the virus needs to escape this compartment. The escape process is triggered by an increase in acidity. This drug–choloroquine or hydroxycholoroquine–may prevent the acidification, which keeps the virus trapped, and unable to replicate.

why are we hearing so much about it: Fox News and hydroxychloroquine

While a therapy for the coronavirus is potentially big news, it has not been proven by reputable studies yet Fox News has been pushing the hydroxychloroquine narrative–more than any other news outlet.

The network’s hosts and guests promoted the use of the drugs over 100 times from March 23 through 25, which–according to an open letter from 74 journalists–is creating a dangerous false impression of a working treatment for the deadly disease. 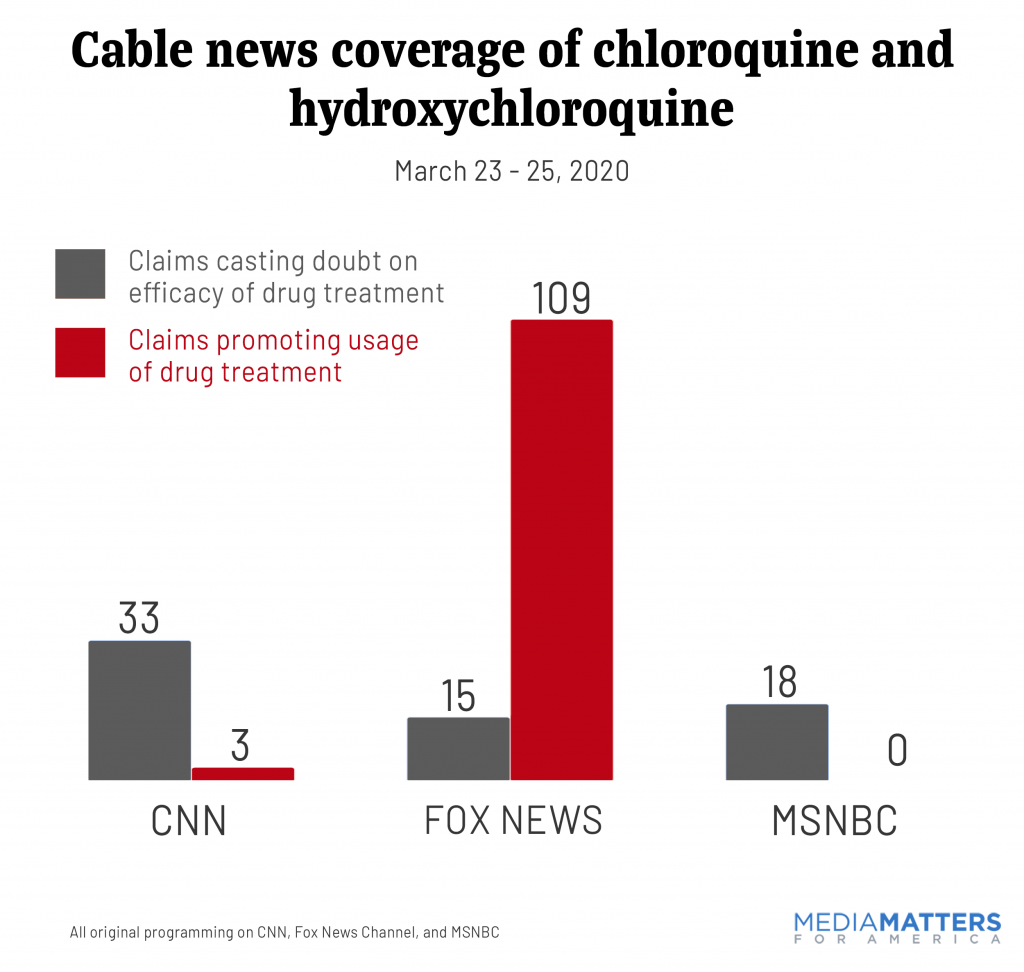 Fox News and misinformation, including hydroxychloroquine

74 journalism professionals across the US wrote an open letter to Fox News urging the channel to stop the spread of “misinformation” and “false statements” regarding the pandemic.

Despite some “solid reporting” by Fox, the letter refers to several troubling instances. Among other misstatements, it cites their promotion of hydroxychloroquine.

“Viewers of Fox News, including the president of the United States, have been regularly subjected to misinformation relayed by the network—false statements downplaying the prevalence of COVID-19 and its harms; misleading recommendations of activities that people should undertake to protect themselves and others, including casual recommendations of untested drugs; false assessments of the value of measures urged upon the public by their elected political leadership and public health authorities,” the letter reads.

The group pointed to a segment in which Tucker Carlson reported on a French study that claims that hydroxychloroquine can be effective against COVID-19.

The letter-writers, led by a Columbia Journalism School professor, called on Fox “to help protect the lives of all Americans” by ensuring the network airs information “based on scientific facts.”

Rigano appeared on both the Ingram Angle on March 16 and the Tucker Carlson show on March 18 to promote the drug. At that time, he falsely stated he was affiliated with Stanford University (he’s not) and he referenced a French study that suggests that coronavirus patients benefited from hydroxychloroquine.

Rigano didn’t talk about the limitations of the study:

First, the study size was really small, about 20 patients by the end of the project. In order to demonstrate efficacies, researchers need to study large groups across populations, in different treatment areas, with different genetic codes, for example.

Note: Large clinical trials are currently under way to generate the data needed to establish the efficacy and safety of these treatments.

Second, the study was flawed with regard to a control group. Patients from a different institution were used as a control, which means you can’t conclude that the institution itself (or the care it gave) wasn’t responsible for the improvement (rather than the drug). Generally researchers include a control randomly selected within a cohort (same institution, same age, same co-morbidities, etc) so that all the people being studied are similar, and the only difference between the groups is the use of the drug.

Third, the journal that published the study is controlled by the doctor who performed the study. This means there might not have been true “peer review” of the study, which is an essential component of research.

Fourth, the doctor who performed the study is also under investigation for questionable practices in the publication of prior research.

still, we allow for desperate measures during desperate times

Despite a lack of conclusive evidence regarding the efficacy and safety of hydroxychloroquine for use against COVID-19, it has been approved for compassionate care cases. In other words, even though we’re not sure it works or it’s safe, it can be used in patients that are out of options.

dangers of hydroxychloroquine; we shouldn’t claim its safe

The President has claimed that hydroxychloroquine has been used for a long time, and it’s safe. But, claiming that it’s safe for a use for which it hasn’t been tested is getting ahead of the science, and may be irresponsible. For one, the drug can cause a heart arrhythmia that can lead to cardiac arrest.

pushing the use of hydroxychloroquine obscures the social distancing message

President Trump is pushing the let’s-get-back-to-work stance in concert with the hydroxycholoroquine-will-cure-us position. Is the former being bolstered by the latter?

The most important message from our experts has been to combat coronavirus through social distancing and hand washing.

one possible takeaway: a view from WordStirs

Hope is important during a crisis, and this drug may be a solution for severe cases of COVID-19. This means there is reason to talk about it, to report on it, and to hope for it. In order for it to be widely used, however, it needs to be tested for safety and efficacy, which is the role of the FDA. As a result of the pandemic, the process has been accelerated and testing approved, and researchers are working on large trials that should produce enough data to be usable. This is very good news.

Believing in our system is more important than ever, and it requires a level head and patience–not false narratives. And, if patience isn’t possible–if someone is in the hospital, and a doctor has decided this is the only and best option–then the drug is available.

It seems like we have the very best of both worlds: the drug is available to those who need it, and it’s being tested as quickly as possible for broader use.

We need to be careful, however, to label it a miracle drug just yet. For most Americans, the best drug is still hand washing and social distancing.

Back to school; back to quarantine

Trump reacts to protests with call to violence

Learn More About Us

Who Are You Today?